Weather Situation: Vigorous northwest to southwesterly winds are expected across southeastern New South Wales as a cold front clips the southeast today, followed by a second front on Thursday. This second front will bring a cool southerly change to coastal parts on Thursday. Winds will ease in the wake of these fronts later Thursday evening.

DAMAGING WINDS, averaging 60 to 70 km/h, with peak gusts in excess of 90 km/h, are possible for the Southern Tablelands, Australian Capital Territory, Snowy Mountains, Illawarra, South Coast, eastern parts of the Central Tablelands, and higher parts of the Hunter and Mid North Coast forecast districts today and during Thursday morning.

DAMAGING WINDS, averaging 65 to 75 km/h, with peak gusts in excess of 90 km/h, are possible with a southerly change along the coastal fringe south of Seal Rocks from late morning Thursday, including Sydney, Central Coast, Newcastle and Wollongong. Winds are expected to ease late on Thursday.

DAMAGING WINDS, averaging 60 to 70 km/h, with peak gusts in excess of 90 km/h, are possible with showers about the South West Slopes, Central Tablelands and eastern parts of the Central West Slopes and Plains during Thursday morning.

Winds are expected to ease during Thursday after the passage of the second front.

BLIZZARD conditions are likely at times tonight until Thursday morning. The NSW National Parks and Wildlife Service recommends that back country travel be postponed until conditions improve. 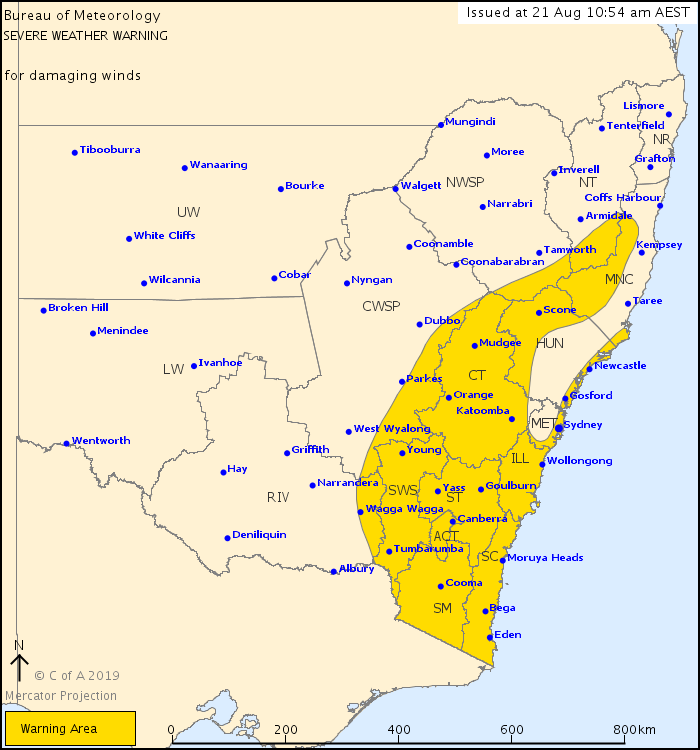