Issued at 4:43 am Thursday, 7 November 2019.
VIGOROUS WINDS OVER PARTS OF THE RANGES

DAMAGING WINDS, averaging 60 to 70 km/h with peak gusts in excess of 90 km/h, are possible for eastern parts of the Southern and Central Tablelands, elevated parts of the Illawarra and South Coast districts, Alpine areas above 1600 metres as well as the high country about Barrington Tops.

For Alpine areas above 1900 metres, DAMAGING WINDS, averaging 80 to 90 km/h with peak gusts in excess of 110 km/h, are likely.
Winds are expected to ease by Saturday morning after the passage of the second front.

BLIZZARDS are possible about the Alps on Friday and Saturday. The NSW National Parks and Wildlife Service recommends that back country travel be postponed until conditions improve.

Locations which may be affected include Bowral, Braidwood, Katoomba, Perisher, Thredbo Top Station, Bombala and the Barrington Tops.

High Range (Wanganderry) and Mount Boyce have recorded wind gusts of 83 km/h between 3am and 4am Thursday. 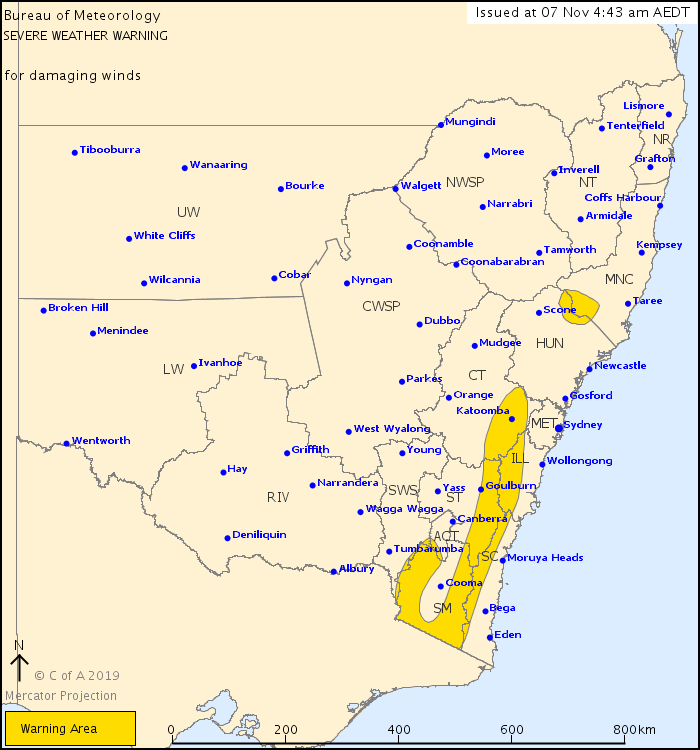