Rainfall totals of 150 - 200 mm over the past week have increased soil moisture in many areas, particularly the upper Georgina River. Whilst the Barkly has seen moderate rainfall so far, soil moisture has increased and further rainfall is expected to cause runoff.

Rainfall in the upper Georgina River and southern Barkly is expected to bring daily totals of 20 - 60 mm into tomorrow with many areas of the MacDonnell Ranges and northern Simpson Desert receiving 20 - 40 mm into Friday.

Many rivers have risen and roads including major highways have been inundated. Areas of inundation are expected to continue this week with renewed river rises from tomorrow. Road conditions in many areas are expected to worsen and some communities may become inaccessible.

Catchments likely to be affected include:
Barkly

See www.bom.gov.au/australia/warnings to view all of the Bureau's current warning products.

More information on the Flood Watch Service and maps of Flood Watch areas are available at www.bom.gov.au/water/floods/floodWarningServices.shtml .
Flood Safety Advice:

The Northern Territory Emergency Service advises that people should:

* Stay away from flooded drains, rivers, streams and waterways.

* Prepare for flooding and move away while safe to do so.

For emergency help in floods, storms and cyclones call 132 500.

Emergency information is available at www.securent.nt.gov.au .

The latest road conditions are available at www.roadreport.nt.gov.au . 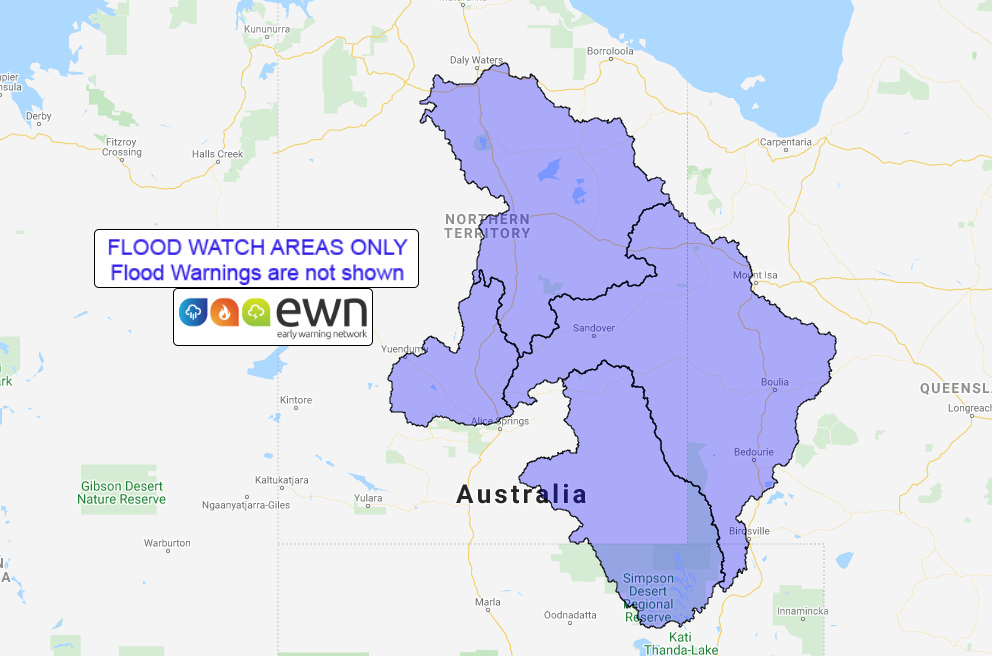