For people in parts of Barkly, Simpson and Lasseter districts.

Weather Situation: At 14:20 CST severe thunderstorms were detected in satellite and RADAR imagery over southern Districts, associated with a trough moving east into the area from Western Australia drawing warm and humid air into central Australia. Severe thunderstorms have contracted to the southwest Lasseter, and to the east of Alice Springs and the southeast of Tennant Creek, with Alice Springs and Tennant Creek no longer at risk.

Severe thunderstorms are likely to produce damaging winds in the warning area over the next several hours. Locations which may be affected include Arltunga, Jervois, Ampilatwatja and Simpson District east of Finke.

The Northern Territory Emergency Service advises that people should:
* secure loose outside objects
* ensure pets and animals are safe
* avoid remaining in the open when storms threaten
* pull over if it is raining heavily and you cannot see, park with your hazard lights on until the rain clears
* avoid driving into water of unknown depth and current
* for emergency help in floods, storms and cyclones, contact the NTES on 132 500. For more safety tips visit www.securent.nt.gov.au 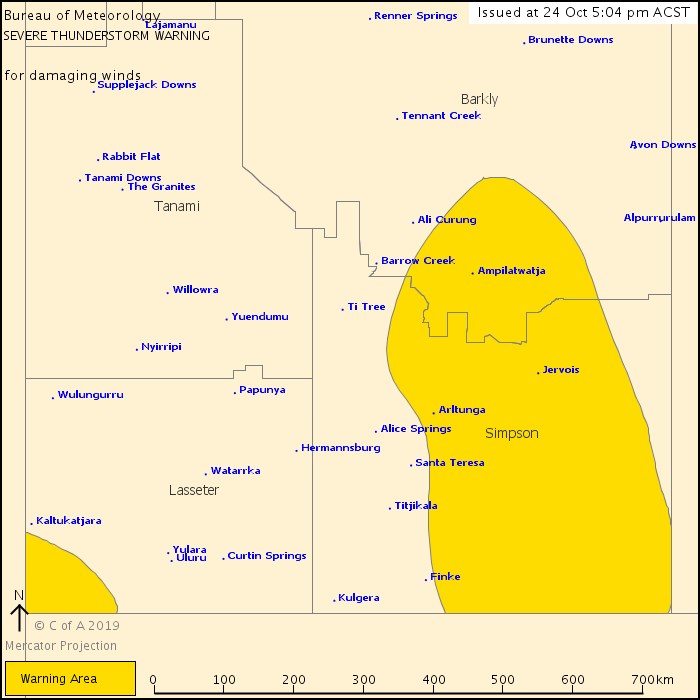