For people in Southeast Coast and parts of Wide Bay and Burnett Forecast Districts.

Thunderstorms no longer severe in the central interior. Heavy rain remains a threat in the southeast.

Severe thunderstorms are likely to produce heavy rainfall that may lead to flash flooding in the warning area over the next several hours. Locations which may be affected include Gold Coast, Brisbane, Gympie, Coolangatta, Ipswich and Lowood.

Severe thunderstorms are no longer occurring in the Northern Goldfields and Upper Flinders, Herbert and Lower Burdekin, Central Highlands and Coalfields, Central West and Darling Downs and Granite Belt districts and the warning for these districts is CANCELLED.

60mm in 1 hour at Priestdale Alert.

Queensland Fire and Emergency Services advises that people should:
* Never drive, walk or ride through flood waters. If it's flooded, forget it.
* Seek shelter, preferably indoors and never under trees.
* Avoid using the telephone during a thunderstorm.
* Beware of fallen trees and powerlines.
* For emergency assistance contact the SES on 132 500. 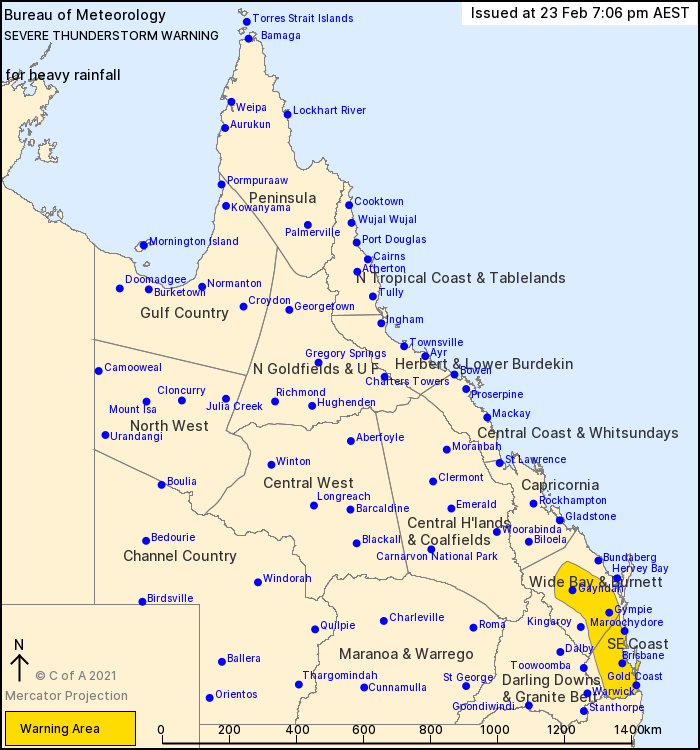