For people in parts of Central Highlands and Coalfields, Central West and Channel Country Forecast Districts.

Weather Situation:
Severe thunderstorms are likely to produce damaging winds and heavy rainfall that may lead to flash flooding over the next several hours in parts of the Central Highlands and Coalfields and Central West districts. Locations which may be affected include Tambo, Jericho and Alpha.

Severe thunderstorms are likely to produce damaging winds, heavy rainfall that may lead to flash flooding and large hailstones over the next several hours in parts of the Channel Country district.

Locations which may be affected include Stonehenge and Jundah.
Blackall recorded 40mm of rainfall in half an hour around 11am today.

Queensland Fire and Emergency Services advises that people should:
* Move your car under cover or away from trees.
* Secure loose outdoor items.
* Never drive, walk or ride through flood waters. If it's flooded, forget it.
* Seek shelter, preferably indoors and never under trees.
* Avoid using the telephone during a thunderstorm.
* Beware of fallen trees and powerlines.
* For emergency assistance contact the SES on 132 500. 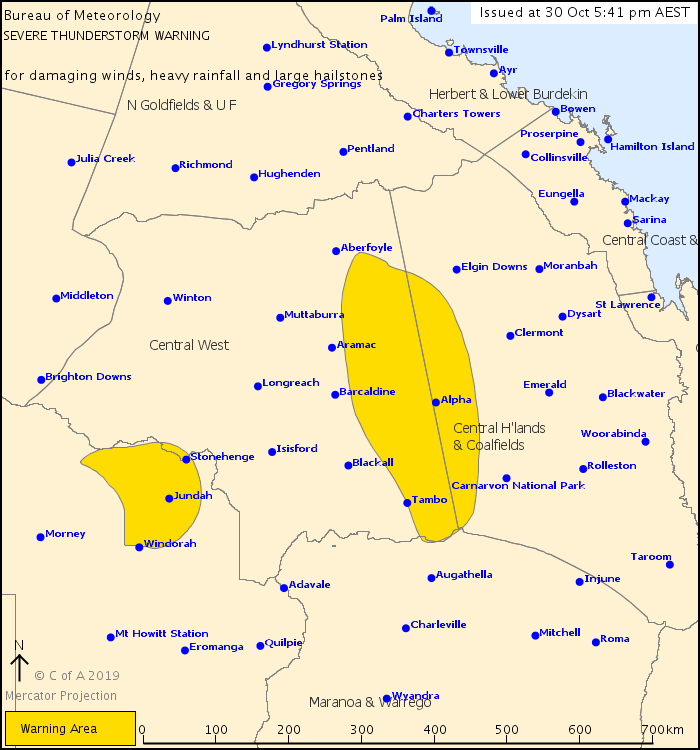