For people in Lower South East and parts of Mount Lofty Ranges and Mid North districts.

Issued at 5:08 pm Wednesday, 6 November 2019.
Strong to damaging winds today and on Thursday.

Weather Situation: A cold front is crossing southern SA, embedded in a strong and vigorous westerly flow, which will continue on Thursday.

Strong northwest to westerly winds are likely be squally, averaging 50-60 km/h at times with gusts to around 90-100 km/h, over parts of the warning area for the next several hours today, and again on Thursday.

It is the coastal area, south of roughly Kingston to Mount Gambier and the higher parts of the Mount Lofty Ranges, which are most likely to be affected today.

On Thursday, damaging winds are expected to extend further inland and are possible throughout the warning area, mainly with squally showers.

Locations which may be affected today include Mount Gambier, Robe and Millicent in the South East and Mount Crawford and Mount Bryan in the Mount Lofty Ranges.
Westerly winds with gusts to 93 km/h have been recorded this afternoon at Mount Crawford.
Gusts of 75-80 km/h have occurred at several other locations. 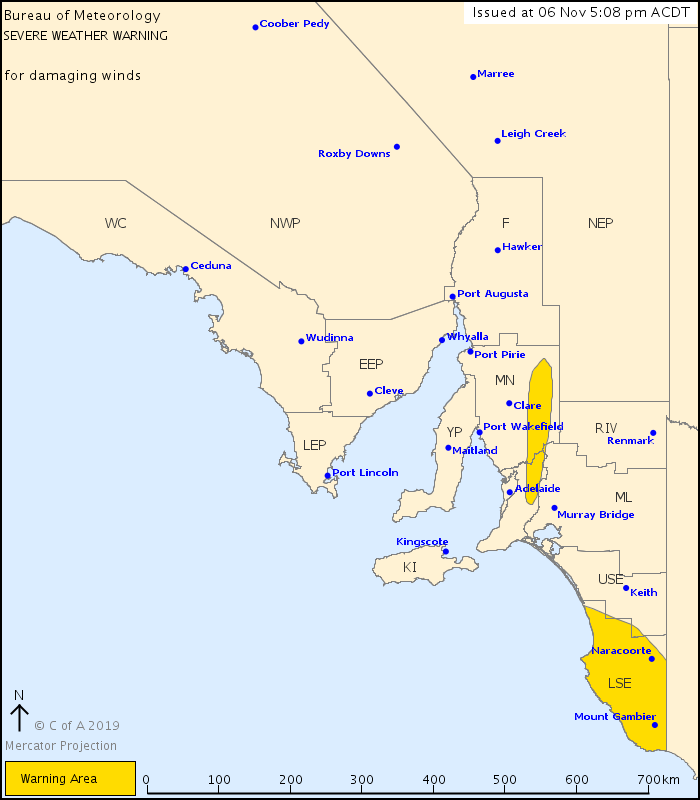