Weather Situation: A strong cold front will reach southwestern Victoria by the afternoon before crossing the remainder of the State during the afternoon and early evening. An associated low pressure system will deepen over Bass Strait tonight.
DAMAGING WINDS, averaging 50 to 60 km/h with peak gusts of around 90 km/h are possible in northwestern Victoria early FRIDAY afternoon, easing in the late afternoon or evening. Significant areas of raised dust are likely with strong winds.

DAMAGING WINDS, averaging 60 to 70 km/h with peak gusts of 100 km/h are also expected to develop about western coastal parts and elevated areas in the southwest district (above 500 metres) from mid afternoon FRIDAY, before extending to Central and West Gippsland coastal parts FRIDAY evening.

DAMAGING WINDS, averaging 60 to 80 km/h with peak gusts to 110 km/h are expected to develop over Alpine areas (above 1200 metres) and along the East Gippsland
coast during SATURDAY morning. Wind gusts could reach 120 km/h along the far east of the East Gippsland coast.

Winds are expected to ease throughout in the west during tonight, but winds are likely to remain strong in eastern parts until SATURDAY evening.

Locations which may be affected include Mildura, Warrnambool, Portland, Wonthaggi, Orbost and Falls Creek.

The State Emergency Service advises that people should:
* Move vehicles under cover or away from trees;
* Secure or put away loose items around your house, yard and balcony;
* Keep clear of fallen power lines; 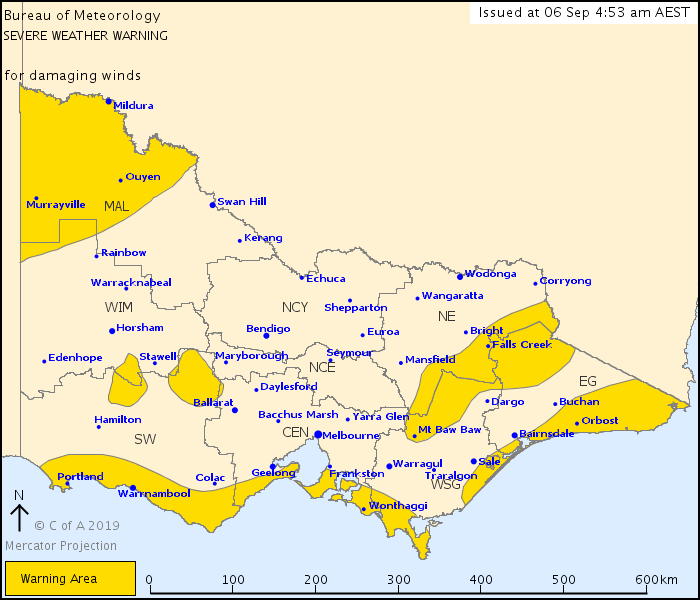